Phew! I can not believe it's been almost a year since I've posted on here! Really, health-wise, Malakai is doing really well. He was recently diagnosed as allergic to wheat, chicken, pork and turkey so a new diet has begun. He has been allergic to egg and peanut for years. So that has been interesting. He has not been inpatient since December 2011. He had tubes put in his ears and adenoids removed in November 2012 and his upper and lower scope done February 2013. Other than those two surgeries, blood draws about every 6 weeks and ultrasounds every 6 months, he's been a normal kid! He's in school a few days a week and is very bright! He can write his name, count almost to 100 with help. I'm amazed by him every day!

Malakai has been chosen as the Honorary Wish Child for the Make-A-Wish Foundations Walk for Wishes this July 13. It will be held at the Fort Harrison State Park. Registration starts at 9 am and the walk starts at 10. We are hoping to have a BIG team this year! Head on over to WishWalkers.org to sign up under Team Malakai. Everyone who will be there needs to register. They will have breakfast and lunch. It's a family friendly event. The kids had so much fun last year!! We collected $1750 last year and are hoping to exceed that for this year.  Goodies CupCakery in Whiteland has agreed to help in our efforts. They will be selling the little blue Make-A-Wish stars to hang from their ceiling. Malakai told the owner he wanted to sell 1,000 starts. We hope they exceed his goal. He will be SO excited to see the stars the next time we go in!

Also, he has been quite the speaker for Indiana Organ Procurement Organization (IOPO) He went with me to University of Indianapolis. He did such a great job raising awareness for organ donation. I was beyond proud of him! Their new marketing campaign is "I mustache you a question, Are you a registered organ donor"  He was wearing sunglasses with a mustache or a stick on mustache. He would run in front of someone and say "Stop right there!! You're not going anywhere, I mustache you a question!!" If they said they were already an organ donor, he'd say "Good!" and if they weren't he would say "you should be, because I wouldn't be here if there weren't organ donors" and he'd show them his scar! He had about 10 people sign up BECAUSE of him and his story. If you're not already an organ donor, please consider becoming one. Malakai is a testament on why organ donation is so important!

On a side note, Makena is currently in Kindergarten and doing very well! I can't believe how fast she is growing up.  She loves playing outside and digging in the mud! She's independent and likes to feel grown up. IE, pouring her own cereal and "helping" do the dishes. Kaiden is a firecracker. That's the only way I can describe him. He's blonde headed, extremely independent and wants to do everything on his own. He's kind of mean (he's already been sent to the "office" for hitting his friends at school!) but he does have a sweet side, occasionally. But he is the definition of "all boy" He just decided on his own about a week ago that he wanted to sleep in the big boy bed. He's done amazingly well. He also has been really good about potty training. He's 2 years and almost 3 months. I'm very proud of him :)

Anyways, that's it for now. If you have any questions about how to become involved with Make-A-Wish, IOPO or Team Malakai, please email me at GoTeamMalakai@yahoo.com!!

Malakai getting his monthly labs drawn, he's graduated to sitting my himself. Proud, but sad :( 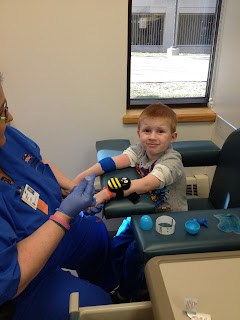 Kaiden sleeping in his big boy bed for the first time! 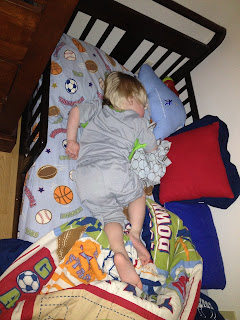 Makena and Malakai at Goodies CupCakery in Whiteland, Indiana! 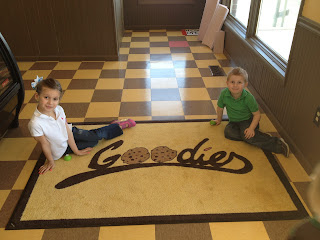 Malakai outside of IOPO office after having his pictures taken for some future marketing. Keep your eye out for that coming soon! 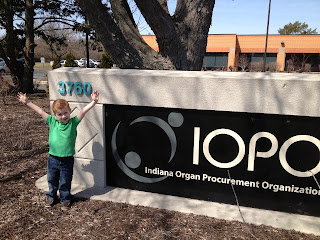