We have yet to get internet out at our new house and therefore I am never on an actual computer. I came into the office today to work so I decided while I had a few minutes, I would update this blog. I've been a terrible blogger post transplant. But I guess it's good that he's doing so well that I don't have much to update :) He's a walking, talking toddler. He's weaned from breastfeeding (Hooray!!) He loves to mimic his sister and he's finally been trying new foods and drinks! His labs were stable last month, praise God. He's sleeping through the night, although he's an early riser (Usually around 7:15) He's getting stronger in his physical therapy. You should see him try to jump. It's hysterical. It looks like he has a peg leg. His core muscles are what needs work but I think in a few months he will be caught up to his age. We've taken his Occupational thearpy down to only once a month...he's doing so well. He's also going to be a BIG BROTHER. Yes, I am indeed pregnant. Almost 10 weeks to be exact. This was not a planned pregnancy in the least. Malakai is still so needy and with his health being fragile, we were not expecting to have another baby at least until he was 3 or 4. But God has other plans :) We are due January 24th. Not only am I expecting, Josh's sister is pregnant with a little girl due in September and his brothers girlfriend is expecting a baby in December. Josh's cousins wife, we are close to just found out they are expecting as well. Four new babies in the Cruse family!! Makena really wants a baby sister and says if it's a boy, she will be sad. I'm trying to prepare her in case it is a boy. She understands but I think will still be disappointed if it's another brother. She will tell complete strangers "My mommy has a baby in her belly...but we don't know what it is. Only God knows. He gets to choose!" It's very sweet how interested she is in the pregnancy. She wants me to read her the pregnancy books and asks 1000 questions. Her mind is much different than when I was expecting Malakai. We're stuck with baby names, trying to decide if we stay with the "M" or move onto something new. We have plenty of time, I suppose :)

I am thinking of writing our donor family again. I sent the first letter in March and haven't heard back. I think about their angel often and what she has done for our family. She gave us our son back. I ran across this picture on my computer and it makes me want to cry. He was so thin and so, so sick. Here he was just weeks before his transplant. 7 months old and probably only 10 pounds. 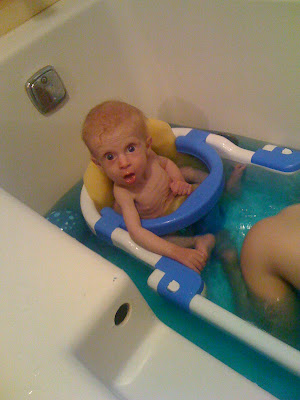 And here is at Emma and Jack's birthday party riding a big kid bike. He really wants to be big :) 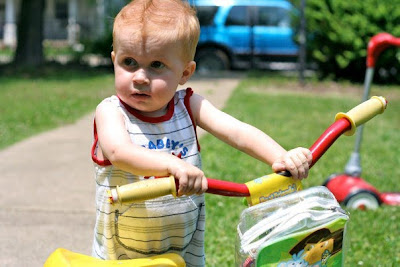 Messy after breakfast...complete with a baby food unibrow!

Here is my little guy at the zoos splash park. He loved being able to run around with all the other kiddos...I loved watching him. And check out that belly...doesn't he look great?!!! 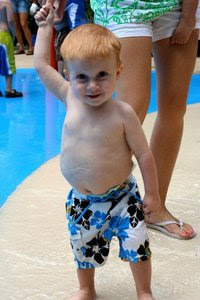 Newer Posts Older Posts Home
Subscribe to: Posts (Atom)
The hospital bills have been overwhelming. Please help the Cruse Family and DONATE whatever God lays on your heart.